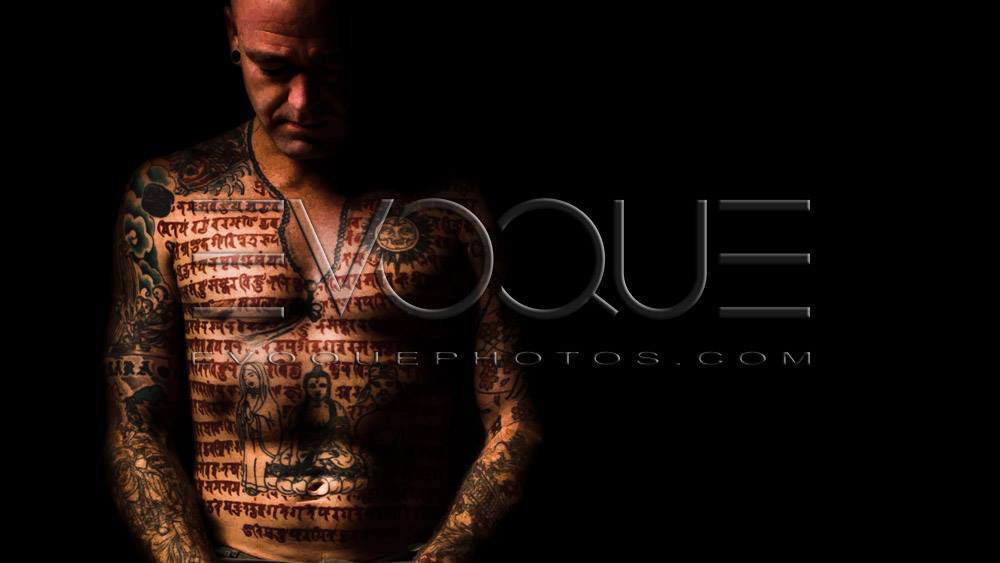 .
My tattoos, or, rather, my single narrative tattoo, essentially charts the Eastward migration of Buddhism from its Hindu sources in India through its multiple manifestations / incarnations / influences in Tibet, Myanmar, Thailand, Indochina, China, and, finally Japan. Not unlike Shakespeare’s Parolles, from the ironically (at least from Parolles’ point of view) titled All’s Well that Ends Well, before I put my once-discrete tattoos into dialogue, into the development of classical narrative arcing, I was a “man of shreds and patches.” A tattoo here, a tattoo there. I found my nine scattered tattoos aesthetically unsightly. So over an 18-year period I worked (with the help of tattooists from Canada, Thailand, Colombia, India, Israel, Vietnam, and Hong Kong) on establishing an interconnected narrative. A story. But a postmodern story: one that includes, among other things, fragmentation, flashback, back story, interruption, and openendedness. There’s no single reading of my story of Buddhist passage.

I kept my tattoo relatively conservative—no neck, above elbow—until I became a PhD candidate, after which I figured my life would be more determined by my CV than by my appearance. I was both wrong and right (if we still believe in these moralistic reductions). Right because, here I am a contemporary literature and culture professor in Hong Kong, where I have written three books. Wrong because I don’t wear my doctoral degree like I do Rama and Sita and Hanuman on my right forearm and a Chinese dragon and I Ching trigram and Japanese sakura on my left. But what I really am is a mirror: I read how people read me, how people approach or dismiss me based on my honest body modifications. I call my tattoos “honest” because they are not designed to be invisible aesthetic modifiers, like, say, cosmetic and plastic surgeries, not to mention the obvious classist and racist colonial tenors of skin-whitening pills and creams. I too, of course, am always-already guilty of misreading people, especially given that every reading is incomplete, is in fact a misreading. But there’s a real sense of pragmatism in personally being so easily misread and oft-dismissed based on my tattooed appearance. I prima facie know whom not to waste my time upon. As a mirror, I know almost clairvoyantly who thinks critically, and whom stereotypically. So it goes.

Jason S Polley is Associate Professor at the Department of English Language and Literature. [Click here to read all entries by JSP.]