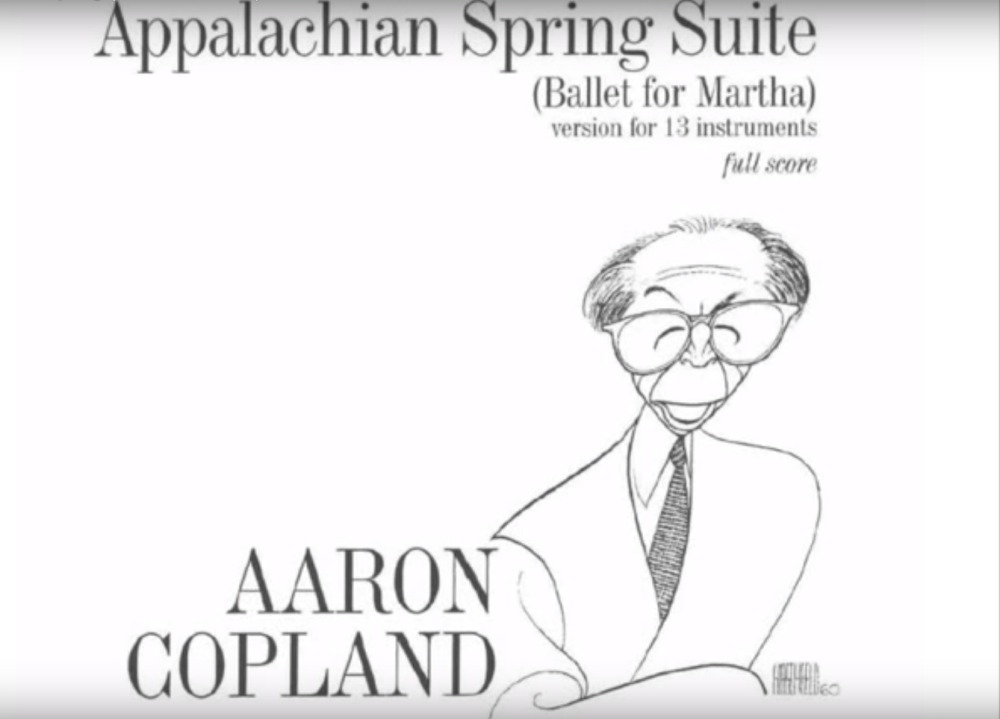 One of my earliest memories is of lying on cool, terracotta tiles at my godmother’s house on a warm, summery California afternoon in the suburbs of San Francisco in the early 1970s. (This was sometime after the successful moon-shot and before Watergate.) There is a breeze blowing through an open window, and on it the customary scent, as I recognize it now, of mixed eucalyptus, dry grass, and oak.

I am experiencing my first recollection of absolute contentment, of peacefulness. I hear the familiar sound of BC tacking and veering down the corridor, clipping and leaning, heading eagerly towards me where I lay.

My godmother has an LP record of Aaron Copland’s Appalachian Spring playing. I have never heard it before, but because of this moment I will remember this song, and its particular soundtrack to this memory, for the rest of my life. However long it lasts.

My godmother was comfortably well-off, directly related to the earliest founders of the University of California land grant. By the time I met her (only after she had made friends with her younger neighbors, my parents) my godmother had been abandoned by her husband, a wealthy attorney whose firm provided for the legal needs of the elite classes in Berkeley and Oakland. I learned years later that my godmother had been pushed aside for a younger woman, a fact which did not scandalize her perhaps as much as it should have.

What my godmother regretted, rather, was the divorce that followed. For my godmother, a devout Roman Catholic, the scandal of divorce bore a taint more permanent and lasting than any fleeting impression of the perfumed nights her husband’s serial adultery must have given. Her marriage before the Second World War, in the late 1930s, had been properly arranged by loving and respectable parents who cared for her. It had befitted the station to which she had been raised.

So when my godmother’s husband eventually left her all alone, to a big, vacant house with a car in front and oak trees and a small but reliable creek in the back yard, her now all-grown children off to engineering school or to military service in Viet Nam, it was the aching presence of the divorce that seemed wrong. It had been legal enough, after the modern fashion, but it wasn’t respectable. She was embarrassed by it, and she never mentioned it.

She much preferred to talk about her older brother, a young, handsome officer who had gone down with the rest of the crew of the U.S.S. Arizona on the morning of the 7th of December, 1941, the buzzing of kamikazes in the air. She gazed upon his fine portrait hung above the grand piano in her living room. To visitors she spoke of him fondly—as a brother and, more importantly, as a man and as an American. Sometimes at leisure she sat alone on the piano bench, erect and still, instead of playing. Or, when pausing for an instant at whatever else she had been doing, she stared intently over her shoulder as she turned her head, laying her arm across the soundboard as if for emphasis.

The portrait of my godmother’s dead brother seemed a true likeness. His deep eyes resembled his sister’s unmistakably, with high cheekbones and fair skin. He dressed in navy blues for the formal sitting, wearing the white cap and gold ensign attesting to his commission from Annapolis. My godmother’s love for her dead brother was uncorrupted by time, as if 1971 and 1941 were one and the same. So she told me about him, and I remember she wore a vacant expression as she spoke, hovering near the piano and speaking almost inaudibly, talking as if from a great distance. Small as I was, I remember that sometimes she seemed to be talking to him.

Such that my divorced godmother was not entirely alone in her big beautiful house. Nearly every flat surface higher than waist level was carpeted by old magazines and arrayed piles of thank-you notes, leaning to the one side, this way or that, which she never got around to filing. She was always so sorry about this clutter, and the lack of snack food in the cupboard, and so many other things. (She kept the darker recesses of her home barricaded and inaccessible, asking that guests linger in designated areas of a more acceptable untidiness.) She was proud that she kept up with her Christmas cards, at least, and puttered much of the time among the rambling flowers, bushes, vines, and perennials in her back yard nourished by the still quite moderate climate as it was in those days. Like Italy’s.

Born and bred among the elite though she was, my godmother did her own cooking, shopping, and driving—all rather poorly, one understood—since by the late 1960s there was no tradition (in Northern California at least) of a servant class populating her more liberated sense of privilege, natural as that remained. Perhaps ladies might not want to entertain so much as formerly; perhaps it was just harder to justify bringing in help to no good purpose. She was divorced and the children were grown. Apart from her voluntary work at church, she did not have to seek employment outside the home. So the piles of unanswered correspondence lengthened across the dining room table in the glass-covered studio, fell onto the chairs, and sectioned into multiplying piles.

My godmother knew precisely where everything was. She passed the time as the wealthy usually do, after a solitary fashion in the presence of many remembered things, some physical and some not. And no one disturbed her. Or them. Nor did anyone disturb the sense of order she had imposed upon a history of loss. She still possessed her dignity. As such, my godmother was not entirely alone. I supposed she communed with the portrait of her dead brother, one means of expressing her family’s tremendous loss, his death a gift to the unforgiving waters off of Oahu. His sacrifice made no less terrible by the fact that it came in the morning to the sound of sirens, the president’s voice on the radio, and no wondering how.

I was there sometimes, too, through that spring and summer of 1971. I made some noise when exploring around the silent house, peering into the kitchen where no food was, or being enticed and frightened by the half-opened doors leading onto dark and inaccessible rooms where I had been forbidden to enter.  Or admiring the dead officer’s portrait, only to wonder what it might feel like someday to have a beloved brother or sister die.

I never felt alone. My godmother had an endearing, three-legged beagle named BC who clearly didn’t give a damn about human history. He was always cheerful, jogging along with a maimed gait, and ever on the verge of tipping over. But never tipping over. He had exuberance, and style, and shattered as he was he never got mad or sad at the universe. (I never learned the why of the miraculous dismemberment, how his front-right foreleg had liberated itself, in flight, from the bumper of a Chevrolet coupe speeding along Springhill Road.) The gay, old wobbler had survived. And, myself at the beginning of my own career, I felt like BC understood me.

Being in his dotage, BC was rather fat on the canine vine. (He was called “BC” presumably because he was older than most people could remember.) You could always hear him careening along at a distance, the nails on his three extant paws clipping furiously down the linoleum corridor from the kitchen, across the wood parquet floor, and onto the terracotta tiles. These tiles fronted several steps leading down to a glass-covered stone patio which served as a spacious sitting room, now irrevocably cluttered, with a view of the garden and, beyond that, a shadowed bend of the creek.

This was precisely the spot where I am now listening to Copland’s Appalachian Spring. I am a sleepy and content boy of just under five years, lying down on cool terracotta tiles the color of baked, rust-colored clay. There is a small carpet, I remember, so the press of the stone on my head is not too hard where I lay. It is very quiet, apart from the music, and but for the promising staccato dance of BC coming. In those days “Western-style” homes were of open-air design, without staircases or eaved attics, and seldom brandished air conditioners unseemly and gurgling.

All through that spring and summer, I was a godson who paid regular visits to his godmother. I didn’t really understand why the visits had increased in frequency and duration. It was during that summer that my mother had made her own momentous decision, a decision becoming more regular and being made more often among that first generation of suddenly more empowered middle-aged women making such momentous decisions, to divorce my very Roman Catholic father. My godmother had attended my baptism and first communion; she and my father had had the faith in common. And now she and my mother had divorces in common. (For my mother, the necessary act of survival had fewer attending scruples.) Theirs were the only two divorces along our affluent street, stories of neighbors otherwise hidden among the peach trees and rose gardens, rotting sweetly unseen like compost for the birds and the bumble-bees to speculate upon.

As such, my visits were an acquired rather than an in-born privilege. To have a godmother to watch over me, absent-mindedly, while my mother scrambled toward her radically new-found independence and the radical prospect of how to feed five children with no money to speak of and a dead-beat husband who had, without her knowledge, taken out a second mortgage on the lovely home she would soon be forced to vacate for a humbler, rented accommodation. (In those days, any woman, educated or not, couldn’t get a credit line without her husband’s signature.) So I would shortly enter the period of long spaces between eating after school, or barely remembering to eat, the apartment key dangling from my neck by a shoe-string. Another divorce made real, another peach fallen too far from the Diablo Valley tree.

Happily, right now, and right then, I don’t know or care about any of this. My godmother is listening to Aaron Copland’s Appalachian Spring in the afternoon. She is rummaging through boxes toward the end of the corridor for something the importance of which I cannot understand. She has just come out onto the patio to see if I am asleep, peering over her shoulder, and pausing slightly, as she walks back into the seldom used living room where the portrait of her dead brother hangs above the piano.

And I am listening, too, wondering when BC will come, and for how long.

Stuart Christie is Head of the Department of English Language and Literature. [Click here to read all entries by or about Stuart.]