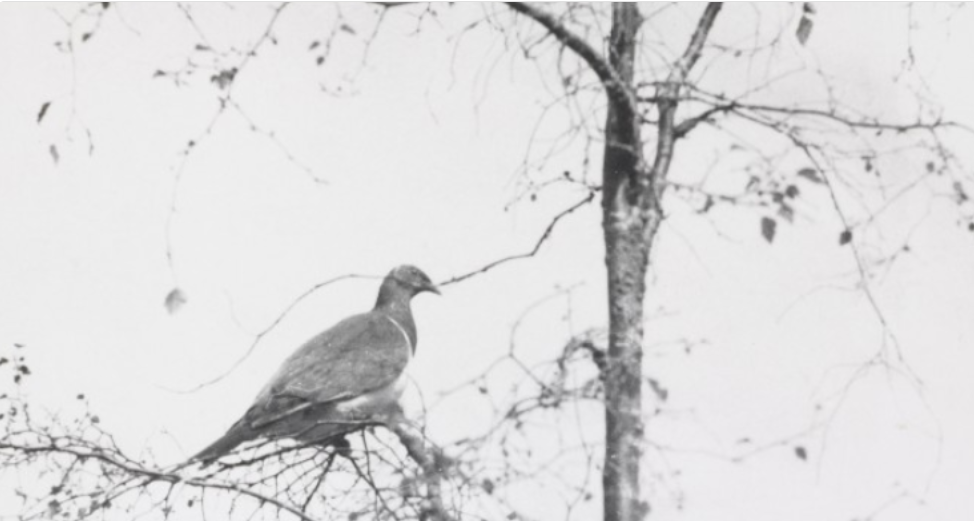 Source: Museum of NZ (via.)

Having little to his name when he died, the reading of Henry Fromm’s will went quickly. Droning over the inaudible flutter of the white noise machine, it was read by one of the linen-suited lawyers. The small group of heirs, promising them by phone (sitting on the blind receptionist’s desk) some infinitesimal speck of the estate, they perched like sleeping birds on the yellow pine chairs; muffled by the thick mahogany-lined walls and plush carpeting in the brightly lit lawyer’s office, burning their eyes, they could scarcely hear the heavy traffic or the barking of neighborhood dogs in the street rumbling past the window outside.

Finding himself irrepressibly and perhaps even irresponsibly aggrieved at the grammar of the piece, young Franklin’s one good eye repeatedly strayed to the fly-specked window, where a pigeon with nasty red-rimmed eyes, watering, clawed a smaller bird for position on the outer sill. “Have you noticed,” he whispered to his younger sister Gabriela, looking back at him from under half-lidded eyes, “all the dangling modifiers?”

The quick reading of Henry Fromm’s will, dying with so little to his name, dragged on.

Flickering glancingly from his mottled face to his breast pocket and over to the worn seams of his right shoulder, Gabby’s muffled whisper came back: “It won’t stand.”

And it was, realizing it now, quite true: seeing their father in memory’s eye as incomparably more proficient at building coherent sentences than the office complexes hired by his construction company to erect, he had somehow left behind a last will and testament without a single square corner or plumb wall, or money in the safe.

Willing little to their names, dead to the reading of the lawyer through the dangling of the modified provisions of Henry Fromm’s quickly, the.

Had the lawyer, Franklin wondered, dictating his last will and testament to the, struggling for breath between gasped gulps of pure oxygen from the mask he lived behind for the last four months of his, no longer even hearing the lawyer’s voice now as the barking of the dogs and the shrieking of the pigeons crescendoed in his, seeing his sister turn to him now in mute wonder at the yellowing of, somehow garbling his, somehow garbled his grammar on his own without legal or linguistic advice from the lawyer whose voice was filling him now with a quiet frenzy?

The eye, once glanced over for the hearing of the reading of the garbling of the text by the grammatical subject of this sentence, left Franklin uncertain as to who, when juxtaposed with by, might, how, or whether, suffused with false confidence, be in the.

Becoming the pigeon’s red-rimmed eye, not counting Franklin’s biggest problem at the moment, the pecking of the other pigeon pecking at it and the reading of the will being read and the spreading of the room spreading out and filling the space filling him up behind the window of his one good eye like god or bird or plumb-bob, he. He:

Having little to his name when he died, the reading of Henry Fromm’s will went quickly.

Douglas Robinson is Chair Professor of English and Dean of the Arts Faculty. [Click here to read all entries by Douglas.]