The HP Series showcases excerpts from excellent Honours Projects by students from the Department of English Language and Literature. [Read all entries here.]

I am a girl. I was born a girl. My biological traits tell me I am a girl. So, unless I undergo sex reassignment surgery, my sex is something that I cannot change or something I have no power to decide because I was born like this. Throughout my childhood, I was told countless times to act “like a girl” and be “girly”. My mom told me to speak softly but not yell, my dad forbade me to cut my hair short, my grandma told me to put on a dress or skirt rather than going out in jeans all the time. I was so confused growing up, asking myself and my family so many times: “why can boys run all over the place, why can they fight, why can they play football… but I can’t?”. The answer I received was “Because you are a girl and you should be like a girl.” Dear readers, does this sound familiar to you? 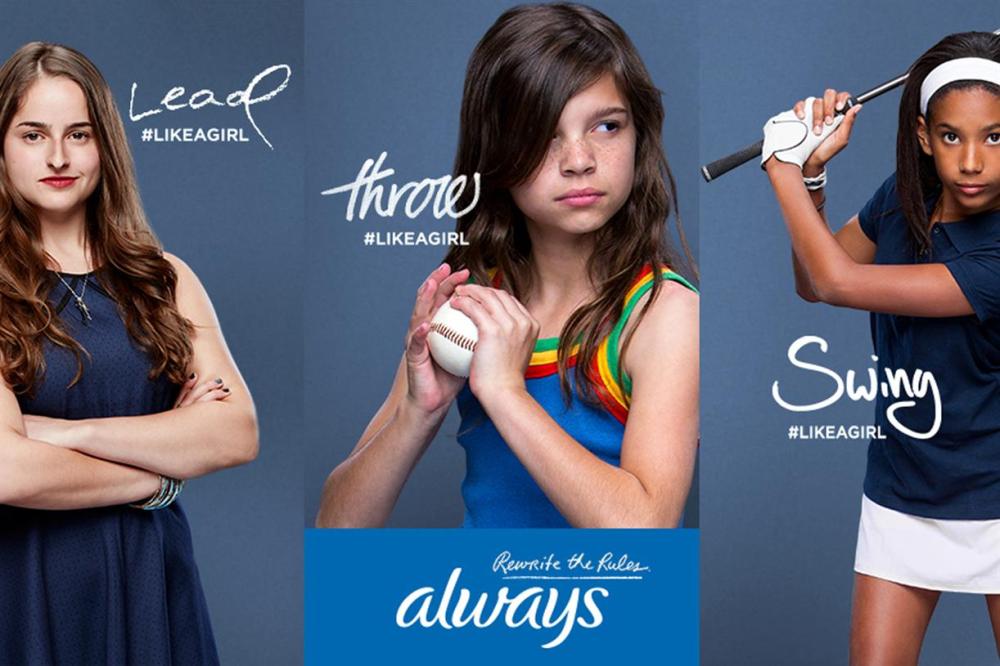 Always, a brand selling feminine hygiene products, published a video in 2014 asking people to stop gender stereotypes by urging them to rethink what “like a girl” implies. The video asks different people to “run like a girl” and “fight like a girl”, and very predictably, interviewees run in a sissy way by flinging their hands around and fighting with powerless fists. However, when they reflect upon the statement[1], they find it insulting and more like “a bad thing” when one is told to be “like a girl”. The aim of this video is to “make #likeagirl mean amazing things”, so even if one is told to behave like a girl, it is not something she should be ashamed of; and “run like a girl” does not necessarily mean in a gender-stereotypical way, it can be “run like you” which can be as fast and wild as the boys. To further strengthen the concept of empowering women and diminish gender stereotypes, Always is helping girls internationally by providing necessary education[2] and help[3], they launched a social media campaign by asking netizens to tweet #LikeAGirl and share their confident experiences in being a girl.

Mark Twain in The Adventures of Huckleberry Finn tackles similar gender issues; he regards gender as a set of cultural ideas. In his fiction, femininity is but pretending and acting according to men’s perspectives of women. The reason why Judith Loftus discovers Huck’s dresses up as girl[4] is not because he doesn’t LOOK like a girl, but because of his failures to ACT like girls by “throwing straight” right at the rat. According to Loftus, women always “bring thread to the needle”, “spread laps to catch things” and “cannot throw straight”, so, in order to show ones’ femininity, he/she has to pretend through acting. 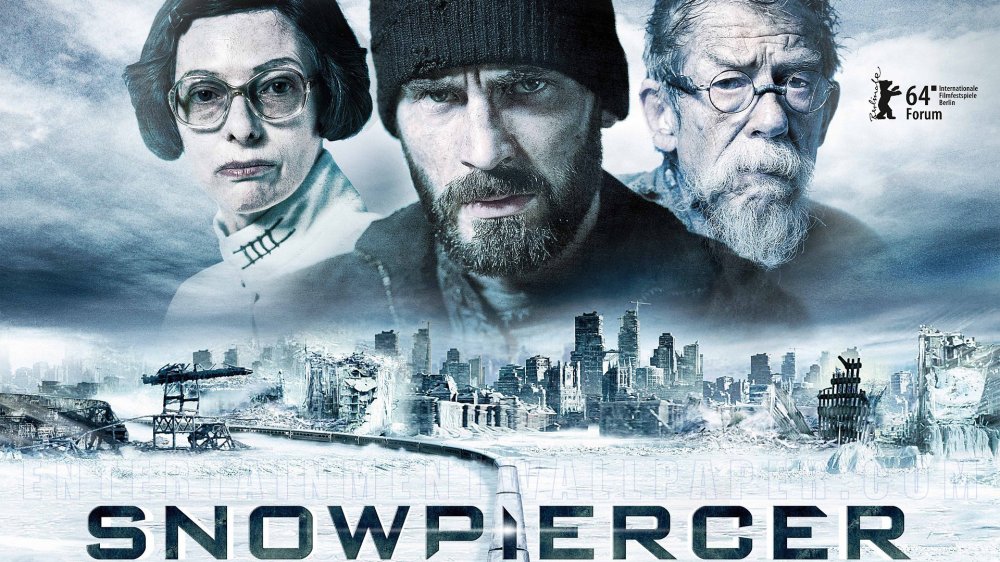 Topics like gender stereotypes, sexist views and objectification of women have long been discussed and debated over the decades; it is true that improvements have been made continuously like increasing education and job opportunities for women. However, at the same time, these situations are still deep-rooted within the society. In both Snowpiercer and High-Rise, women are treated unequally through characterising them in a stereotypical way in terms of minimise their ability and excessively sexualising them. In Snowpiercer, the presence of women is often sex-related, they are either naked or dressed in a very sexy way, and are usually prostituting or having sex with men. Adjectives used to describe women are mostly violent and disrespectful like “bitch” and “whore”.

While in High-Rise, the sexist situation is even worse, in which all female characters are sidekicks and unimportant. Their existence in the plot serves the purposes of either being sexually assaulted or having intercourse with the male characters. Not to mention NONE of them are independent and intelligent in a sense that they can’t live without the assistance and existence of men. Take the example of Richard Wilder’s wife Helen ­– she relies on her husband to bring her money and food since she is a stay-at-home housewife with two sons and still pregnant. Most of the female residents are housewives and socialites who depend solely on the income of their husbands or partners. Even the small number of female characters who do work, work as models, television anchors and flight attendants, jobs in which physical attractiveness rather than intelligence is demanded. While the male residents are all well-educated professionals like lawyers, doctors and even famous tycoons. From these two fictions, we can see the situation of gender stereotypes and women’s de-representation is not only confined in social context, but even embedded in unauthentic fictional stories.

When both Snowpiercer and High-Rise are visually presented, the situation of the gender stereotype is even more apparent in terms of their costumes and actions. For example, most of the female characters in High-Rise dress in a relatively exposed and sexy way, whereas, we can merely see intelligent female representations in the Snowpiercer movie. Indeed, gender stereotype and women objectification have long been a big issue in Hollywood movies. One very famous example would be the James Bond series that overemphasises men’s masculinity and intelligence as reflected in Bond, while framing female characters as eye candy.

3. Why do girls love princesses?

More disturbingly, this situation applies not only to teenage fiction or movies, but also children’s books. From sociological research carried out by Florida State University in 2000, it is said that “male characters appear in up to 100% of 20th century children’s book in United States”, further supported by the report published by Geena Dave Institute on “Gender Roles & Occupations”[5], only 19.5% of female characters have jobs or career aspirations, compared to 80.5% of male. Elena Favilli and Francesca Cavallo, authors of Rebel Girls, are aware of the catastrophic effects of this problem, decide to help by publishing a video reflecting upon this situation and publish their own book Good Night Stories for Rebel Girls. The book features 100 stories of real women who have achieved something incredible, aiming to educate girls in a correct way so they are capable in becoming “anything that she wants”[6] without the help of a price, a man or even a mouse. According to Dr. Murray Krantz who specialises in family and child science, the development of children’s gender identity begins at age three and will continuously grow throughout their childhood. Hence the de-representation of female characters and intensive gender stereotypes in children’s stories may hinder kids’ comprehensive and fair development on the topic of gender identity.

What I mentioned above is but a tip of the iceberg, the unequal treatments between gender is happening every day, everywhere. What we are focusing is not purely about feminism which stresses on advocating women’s rights and freedom, but on both gender. It is very important for us to understand it is never the responsibility of one gender alone, but both.

This is directly quoted from Emma Watson’s speech at the United Nations Headquarters in 2014. What she was urging is to strive for gender equality:  empowering women without judging them with another set of ideals different from men. The HeForShe campaign was launched by Watson in 2014, with the aim of raising men’s awareness to help fight against gender inequality by standing up for women but not to reinforce the idea of men’s domination. Since the launch of the campaign, over 1.3 billion people worldwide signed up for #HeForShe online. Apart from Emma, other renowned celebrities have also put forward similar concepts in striving for equal treatment between men and women. Anne Hathaway, on International Women Day in 2017, emphasised the importance of father figures in parenting, that both father and mother should be equally significant in facilitating children’s growth and development, hence, questioning the inadequacy of paternity leave.  In Hong Kong, these worries are as valid as legal maternity leave for mother is 10 weeks whereas paternity leave for father is just three days. So, given the fact that both parents are equally important to a child development, why is there such a huge difference? And realising such situation, why have no further steps been taken to resolve the problem?

[1] They were asked questions like “do you think you just insulted you sister?”, “is like a girl a good thing?” and “how would you feel if someone use like a girl as an insult?”

[2] They provide free educational resources and samples for school to educate students on the topic of puberty and gender. Also, they partner with TED to spread the mission of “#LikeAGirl” by co-creating videos and sharing.

[3] They donate feminine hygiene products to different countries, especially those stricken by disaster. Besides, P&G started a programme called “Always Keeping Girl’s in School” in 2006 in partnership with the Department of Basic Education. The programme aims to teach African girls who are unable to go to school about health issues and how to take care of themselves.

[4] Huckleberry, the protagonist of the novel, is running away from home to escape his impoverished life. To avoid people’s attention, he comes up with the idea of dressing up like a girl. During his escape, he meets Judith Loftus who provides great insights on gender.

[5] Full title of the report: “Gender Roles & Occupations: A Look at Character Attributes and Job-Related Aspirations in Film and Television”

[6] Directly quoted from the promotional video.

Coco Chan is a graduate of the Department of English Language and Literature (Class of 2018).