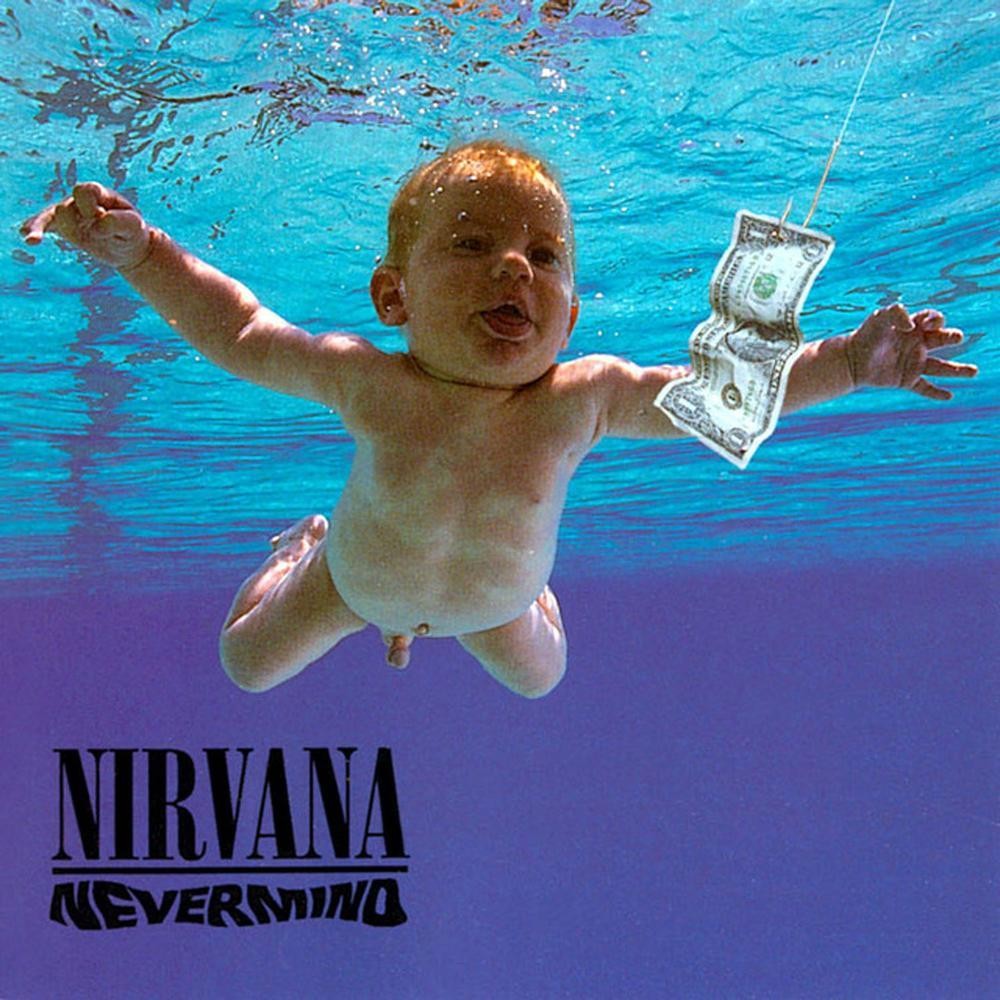 Co-opting Cool: The Figurative and Literal Death of Nirvana

[The Keywords]
These “keys” are in no particular order, with the exception of the first phrase. It belongs at the beginning. But it is the end of the beginning.

[That Now]
It’s Christmas Eve ’91 and for the first (and, desolately, the last) time in what turns out to be my six-year career, I’m not pumping gas, or, rather, and please insert British accent, serving as a fuel dispensing engineer at Duke’s Garage. Charles Depew is manning the pumps, solo. Ah ha! What a geek!

I’m cursing my Dad under my cloudily condensed breath for kowtowing to the friggin’ Establishment. You see, my aunt Mary-Anne, who, to me, was Daisy Duke’s sure-shot doppelgänger (a lean and long blue-eyed blonde) had offered me her car, a sporty ’85 Celica Supra, for my first-time visit to Kathryn Gough’s, the dame I’m into, who lives 30 klicks south-west. “You’re not insured on that car.” That was the discussion. Tout court. So here I am, as the snow begins to fall, what a seriously cinematic prop, leaving my driveway in my own decidedly un-sporty, albeit British Racing Green at least, ’84 Sunbird thinking about how much cooler I’d look were I to land at Kat’s in the sleek Celica.

Oh, that’s Ion’s jeep.
“Hey, Steve, Josh, what’s goin’ on?”
Suppressed giggles. Big smiles. Red pupils.
“Just drivin’ ’round, Jace, you?” Steve replies, as Josh occupies himself by trying to light a cigarette in an as-normal-as-possible style.
“Gonna go see this chick in Manotick. Out by St Mark’s.”
“Cool. Have a Merry Merry, man!” Steve salutes.
“Ya. You too. Drive safe.”

[Some Context to That Now]
Steve and Josh both also attended St Mark’s, the Catholic bilingual school I still frequent relatively “religiously”—ha, ha! Steve was expelled sometime in grade eight. Something to do with glue and his “Demeanor.” He’s now at St Francis Xavier’s, which is 20 klicks north-east in Hammond, an English hamlet next to the French village Bourget, where my buddy Ian and I sometimes go to the Friday Night Dance (vive les belles francophones!) followed by the all-night Chinese buffet for pizza. Yep, pizza. I shit you not! Josh left St Mark’s after middle school for Osgoode High, located in Metcalfe, an English village a mere 10 klicks west of Russell, which is our “hometown” village of 3000 mostly “Anglophone” residents, a sixth of whom are Dutch farmers who never ever seem actually to speak Dutch.

You’ll note that I’m into labels. They multiply. And accrue, sadly losing their innocence, as we age. I’m also into cardinal points. I’ve cultivated these, adopted them from my dad, ever since I earned my driver’s license at age 16. I noticed that little else disarms a roadside cop or customs agent as swiftly as an adolescent who has mastered his cardinal directions. “Yes, officer, I hail from Russell, just 48 klicks south-east of our lovely nation’s capital.” (I get the obviously genius “lovely” qualifier only in retrospect, basically 10 years later from my mom’s boyfriend Denis, who goes by the anglo Dennis.)

[That Now]
Shit, those dude’s are fuckin’ high, man! And on Christmas Eve? When did Josh start smoking cigarettes? “Damn, it’s cold out.”

The last I say to myself aloud as I resettle in my minorly cool car, which I recently purchased used for 1800 bucks, then crashed, then paid another 1400 to have repaired rather than “write it off.” Still owe my disciplined, but damn generous and forgiving Dad 900. My university savings, acquired from my three jobs—i) fuel jockey, oil changer, tire balancer, and general lackey at Duke’s (no relation to Daisy), ii) Russell Minor Hockey Association Referee (we don’t need to say “ice hockey” in Canada), and iii) potato peeler and dishwasher at Lucky 7 in Embrun (the French village five klicks east)—had taken a real hit. No huge deal, though. I still have about three years to sa…

Oh, shit! I can’t believe this is on the fucking radio! I ramp the volume up as the first few bars of “Smells like Teen Spirit” swiftly fill my still-flat belly with butterflies and my yet-tattooed arms with goose bumps.

Load up on guns and bring your friends
It’s fun to lose and to pretend
She’s over-bored and self-assured
Oh no, I know a dirty word

Beside me on the passenger seat lies my courtship Christmas trump card: a gift-wrapped copy of the Nirvana hit on their new CD. Nevermind is Nirvana’s second album, but for all intents and purposes it’s the band’s first. Bleach, the actual first album, I remember from an ’89 ad in the skate mag Thrasher, to which I subscribe, has so far remained under the radar of the soul-sucking corporate behemoths. “Smells like Teen Spirit” is Nirvana’s coming-out party and the introduction of Seattle’s indy label Sub Pop to tens of millions of disaffected youth.

[That Later-than Now]
Not long after its first radio airplay, this very commercialising of an underground scene extant since before the establishment of Sub Pop Records in ’86, HMV literally featured a “Sub Pop” section under which grunge bands like Mudhoney, Soundgarden, Pearl Jam, Hole, and Sebadoh were other co-opted marquees. Cameron Crowe’s film Singles (1992), starring Bridget Fonda and Matt Dillon, complete with cash-cow cameos by fellow Seattle alternative rockers, like Pearl Jam’s Eddie Vedder, Alice in Chains’s Layne Staley (d. 2002), and Soundgarden’s Chris Cornell (d. 2017), capitalised on this underclass scene.

This proliferating exploitation of disillusioned young adults was in no small part responsible for Nirvana front-man Kurt Cobain’s gunshot suicide in April ’94. Cobain’s suicide note concluded with the most poignant lyrics in Canadian rocker Neil Young’s “Hey Hey, My My”: “It’s better to burn out than to fade away.”

Cobain had been labelled the “spokesman of a generation.” He derided this bogus, because always already monetised, cultish moniker. As early as ’91, he loathed the Nirvana fans who un-ironically only knew the ironic hit “Smells like Teen Spirit.” He did his best to refuse performing this song. He resisted corporatisation the only way he could: by reclaiming his dispossession through public acts of rebellion. Reminiscent of The Doors’ lone appearance on The Ed Sullivan Show, where Jim Morrison refused to emend the “morally suspect” line “Girl, we couldn’t get much higher” in the band’s live rendition of the hit “Light My Fire,” Cobain trolled Nirvana’s own hit in front of a live TV audience on the BBC’s Top of the Pops.

Live at the MTV Video Music Awards in ’92, and all but forcing executives to cut transmission, Cobain briefly sang the lyrics to “Rape Me” in lieu of the ones to their scheduled performance of “Lithium.”

Perhaps most telling of Cobain’s longing for a personal as opposed to a commercial connection to his audience is the short-lived Bouncer Guitar Brawl that ensued during the band’s cover of “Love Buzz” somewhere in Texas in ’91, after the singer-guitarist was pulled back onstage while in the midst of crowd-surfing. Cobain responded by bashing the offending bouncer in the head with his guitar. The bouncer countered by knocking Cobain to the ground with a looping, overhand right. The other bouncers along with bandmates Chris Novoselic and Dave Grohl (the latter of Foo Fighters fame) then collectively secured the bouncer and expelled him as the audience loudly chanted “Bullshit! Bullshit….” Cobain dusted himself off. The concert went on. He wanted real contact. No buffer zone. No guardrail. And no labels.

He was 27. The latest member of the “Stupid Club”: Brian Jones, Jimi Hendrix, Janis Joplin, Jim Morrison, Jean-Michel Basquiat, Kurt Cobain. And most recently, Amy Winehouse. All stars. All 27. All dead “before their time.”

Cobain’s suicide, for him a literal version of what the corporate machine had already figuratively executed, occurred just a few months before a number of us soon-to-be high school graduates had been planning to see Nirvana alongside The Beastie Boys, The Flaming Lips, The Breeders, George Clinton, and Smashing Pumpkins live in a field at the fourth annual Lollapalooza, outside Toronto. We still went; Nirvana’s presence merely in the wind. And on t-shirts.

[Some More Context to That Now]
When I wasn’t working one of my three jobs, or training at the Ottawa Beaver Boxing Club, of which I was one of 10 amateur fighters on the competitive team, I was attending music concerts. My first was the Ramones in summer 91. Then Metallica that autumn. Thereafter, my best buddy Ian Moore and I were present at shows large and small on an almost weekly basis. Simon Dahl, Ian, and I even skipped out on the awards and dance portions of our high school prom (where our sometime-crony Shawn Smith had received the dubious, and perhaps Cobain-inspired, “Most Likely to Come to a Tragic End” Prize) in spring ’94 in order to see the Voluptuous Horror of Karen Black, who was the former frontwoman of the Psychedelic Furs.

[That Now]
The at-first excited then instantly ominous radio “Oh, shit” indexical moment is the beginning of the end of all of this. I arrive at Kathryn’s. Mercifully, her parents remain in the wings, leaving the basement to us, where (i) we feast on MTV (she has a satellite dish, a real rarity in this era), (ii) we gambol with her iguana (my first knowledge of such oversized herbivorous lizards), and (iii) she jumps up and down forever in screaming glee upon receiving her Nevermind album, which cost me three hours of grease-monkey labor at Duke’s. Or, alternatively, it cost me one-hour of seriously tense women’s hockey officiating. We’re paid twice as much to ref female hockey. (Adolescents don’t arbiter men’s hockey; men do.) Unlike the older minor hockey boys who simply drop their sticks and fight when there’s an offense that needs settling the old-fashioned mano-a-mano way, the players in the women’s league tend to tomahawk one another with their sticks to settle any instantly outstanding infractions. As a co-arbitrator of such occurrences, one must be vigilant and nimble and fair, and trust that fellow officials, that Chris Novoselics and Dave Grohls, have your bloody back. And neck.

[Now]
That was my only visit to Kathryn’s. My second best friend, and rival, at the time, Simon Dahl, who had no job, but much longer hair (mine swept my jawline, his kissed his shoulders) was the true object of her affections. I was but second fiddle, a stand-in down-market quasi-lookalike (as Mary-Ann was to Daisy) to the quintessentially cool Simon, whose father was rumoured to smoke pot on cannabis-leaf emblazoned large-sized Zigzag rolling papers—but never with his son, nor with his slightly older daughter Janice. That would have cheapened the myth. Just as radio first adulterated then stole the Sub from Sub Pop—for a while anyway. Cobain just couldn’t cope with the noise that his noise demanded. Sebadoh’s album “Harmacy” (Sub Pop, 1996) contains more of my favourite songs and lines. In “Pure,” when Lou Barlow offers the following I can’t help but return to Kurt Cobain, to Kathryn Gough, to Steve’s “Merry Merry”—and then return, and open up, a little more:

I stretch until I’m sore
And then I open up for more
I do it out of habit, not addiction
If I give it up, clean up my blood
Will I still feel bored and dis-connected?

Jason S Polley is Associate Professor at the Department of English Language and Literature. [Click here to read all entries by JSP.]