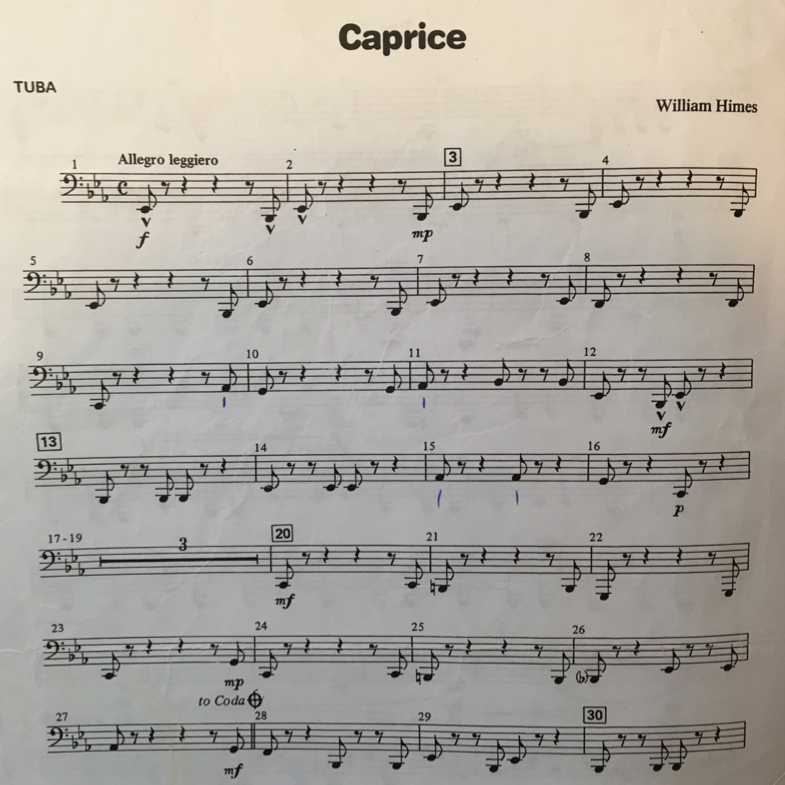 ‘When you breathe into this instrument, darling, you’re not just giving it life ­– you’re giving it your life.’—Eleanor Catton, The Rehearsal, p. 6.

My first practice with the school’s wind orchestra, since the separate training sessions, was when I was in Form Two. In the crowded rehearsal room, everyone was warming up their mouthpieces, tuning their instruments, and adjusting the spidery legs of their music stands. Then, the click of the conductor’s rising baton halted the tuning murmurs. The band focused on the makeshift podium. In front of each musician rested the score for the new term, “Caprice” by the brass band composer William Himes. Caprice… I sat up straight on the edge of my wooden stool, chewing over the sounds, ready to breathe with the tuba and the band.

That day, the word ‘exciting!’ was etched on my now-obsolete blog like a superlative on many book covers. For the rehearsals, I noted all the unfamiliar tuba fingerings on my score. I once fell asleep sitting on a bench next to the school’s bus stop. I skipped lunch a few times. These were fragments which, oddly, impressed the younger me. What I did for the rehearsals, to be exact, as I recalled, reading the score again recently, was to press the first piston of the tuba or none of them. Just release or press one.

Yet, what remains memorable, after mild amusement, is that, for the first time, I felt there was something clear I would like to strive for, something that gave me a yearning itch. I spent time with the tuba until I felt entitled to call it my tuba. I wanted to play well until I could call the wind orchestra our band. Entitlement and a sense of community are deliberate choices and effort. But why do I strive for this something clear? What is this something clear?

‘A song while filling the present hopes to reach a listening ear in some future somewhere. It leans forward, further and further. Without the persistence of this hope, songs, I believe, would not exist. Songs lean forward.’—John Berger, Confabulations, p. 95.

It was some time ago I came across a featured article on William Himes in which there is the line, ‘He takes care to provide fine music for small ensembles and beginning brass bands on a regular basis.’ Fine music, beginning bands… Besides its difficulty, what makes a piece of music fine for beginning bands? I wondered. As I was searching for the audio on YouTube, I discovered that “Caprice” has been a popular choice for bands in middle schools, not only in Hong Kong, but in various other places. Most of the comments expressed a sense of nostalgia for the piece and playing the piece. For some, it was ‘amazing’ and ‘warm’. Where did this pleasure come from?

‘The tempo, the beat, the loops, the repetitions of a song construct a shelter from the flow of linear time: a shelter in which future, present and past can console, provoke, ironize and inspire one another.’—Berger, Confabulations, p. 96.

The brisk unison captivates me. When I play it, the piece often conjures up for me the convivial scene of a welcoming bonfire. The tough trumpets skip along the clashing cymbals in diminuendo, inviting the flutes, clarinets, and vibraphone to chime in. Surrounding the pile with stomping chords and winding melodies, these instruments convene to start a fire. As the branches glow, emanating a soothing warmth, the woodwind initiates the conversation with gentle care, interweaving with the complementary sounds of the brass. What thoughts could they be exchanging? Past glories, heart-warming stories, or present insecurities? To divulge one’s stories and connect them to others and then feel like proceeding blindfold. It requires courage and mutual trust. And then the rhythm goes slower, milder, with less haste. Things wander, and sometimes they converge, here and there. From these understanding moments, the piece builds a radiant communal site.

‘Here both recognizes and demands recognition’—Rankine, Don’t Let Me Be Lonely, p. 131.

This narrative imagination of “Caprice”, I believe, aligns with Himes’ emphasis on active listening during his compositional process. To listen in an active manner, the listener concentrates on the aural details, enlivens different sections of the sounds, and builds an interactive relationship with the music. This active engagement with the music, I would add, has nurtured a bond with other band members. It feels fine and warm because this piece enables beginning players to give and feel; to construct a bonfire, a cordial rendezvous; and get acquainted with each other.

caprice noun. A sudden change or turn of the mind without apparent or adequate motive; of things.—OED

But nothing is built to last; neither is a bonfire. A few weeks ago, I was told that the school has decided to disband the wind orchestra. The score has yellowed; the podium is no more than a pile of planks; the stools are bare, something once clear and tangible vanishes into a slender thread of smoke, leaving a residual smell and warmth. Maybe the inertia of entitlement and the sense of community are less of deliberate choices and effort, but contingencies, just like many other things. The tinkling melody of “Caprice” ebbs away and lingers in the form of a digital recording, remembered on the internet.

‘Most songs being listened to across the world at this moment are recordings – not live performances. And this means that the physical experience of sharing and coming together is less intense, but it is still there in the heart of the exchange and communication taking place.’—Berger, Confabulations, p. 96.

Every now and then I still think of sitting on the edge of a wooden stool with my tuba, waiting for the unison punch, occasionally the excitement of skipping lunch. Memories come in various shapes. These scattered and erratic episodes, accompanying the evocative sounds, often reinvent the warmth I once felt. With these variations of the warmth, I believe one could always seek and share a piece with a smoking bonfire pile. We listen to the sparkles and see.