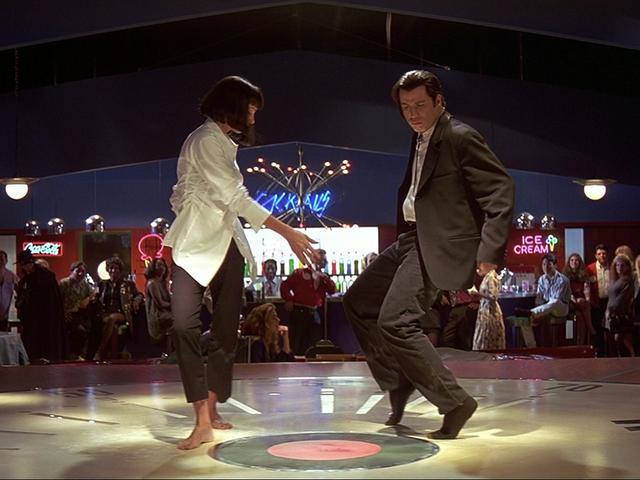 A still from Pulp Fiction

The Centurions’s “Bullwinkle (Part II)” is a surf band’s production and is best known for its use in Quentin Tarantino’s film Pulp Fiction. Tarantino is famous for his directing style, his storylines and what have you. But for me, much more fascinating are his musical choices; he is like a collector of antiques and has an unerring ability to put together the perfect soundtrack album. The music is always the best for the setting and plot of his own movies—bringing together everything from the 60s to the 80s, framed in the right way. It’s like witnessing a friend expertly solving a puzzle.

This time the puzzle has been set up in the scene where Vincent Vega is mixing up some heroin; there is a close-up of powder boiling up over a flame, a syringe, and his facial expression relaxes and on come the opening guitar of The Centurions song. It’s exotic, a little haunting, the cinematography is like it could have been in a vintage ad for drug addiction, if such a thing existed.

In a movie of the same year, Stephen Chow’s Sixty Million Dollar Man (百變星君) , the Jack Rabbit Slim’s twist contest dance is performed again in a rather crude manner that make the whole section more like a parody. An undeniable connection between the two movies is established—the costumes of the characters in this whole short burst of dancing scene are almost exactly the same as in Pulp Fiction, right down to minor details like the pendant.

Back to the main focus, “Bullwinkle (Part II)” reappears in Steven Chow’s Out of the Dark (回魂夜) in a subversive and explicit manner. It is one of the weirder forms of adaptation I have ever experienced. There is a distance between the cultural background, date and place of production, and the genre of the two movies. The ‘adaptation’ is cryptic, in that one is expected to know the song previously used by Tarantino.

I have to confess that, having been born in the 1990s, the name “Bullwinkle (Part II)” meant little to me until I had a look at the soundtrack of Pulp Fiction. As for Out of the Dark, it is a story about how a group of ordinary people (mostly security guards) team up with an insane individual to deal with a problem of a supernatural nature in a building; in other words, a Cantonese version of Ghostbusters, with Maltesers and fresh wraps instead of proton packs and ghost traps and an Asian ghost that takes human form, chopping off limbs with a chainsaw. One of the ghostbusting methods in the film involves a liquid named Bull’s winkle, or ‘Bull winkle’, contained in a Listerine bottle. Whoever rinses their eyes in it will possess the vision to detect all spiritual forms. The screen turns black, and then there is a close-up of eyes and the familiar tune of “Bullwinkle (Part II)” starts playing (it is, in fact, a remixed or altered version, possibly for reasons of copyright). You sense only a hard-core fan of the source material could come up with such an adaptation: from the musical elements, cinematography, to the name of the song and its literal translation, all rejigged in a B-movie by a Hong Kong comedy actor. Sixty Million Dollar Man (百變星君) and Out of the Dark (回魂夜) have different production teams and different people handling the music, which leads one to think these associations to Pulp Fiction are more a personal choice for Steven Chow, who is well known for his active creative input even in those movies of his he has not directed.

It is an interesting case of adaptation to look at though, rather than a theoretical analysis, I am more interested in drawing attention to it so that others can participate in the interpretation of similar cases, of how musical elements are transformed, reformed, reproduced and flow through all narrative devices.

The previous sentence should be the final one but one more thing is worth mentioning. Steven Chow and Quentin Tarantino have both been accused by their detractors of sending unwholesome messages to their younger audiences. Their movies are cheesy in one sense, with bloodshed or cheap jokes making them literally pulp fiction, but they also have enough in them to lead you to an academic study of them.

from Out of the Dark (回魂夜):

Buster Leung is a graduate of the Department of English (Class of 2016). [Read all entries by Buster here.]