Ongoing Moments: A series in which teaching staff and students from the English Department respond to a photograph of their choice. [Read all entries.] [Revisit the “Interrogative” series.]
. 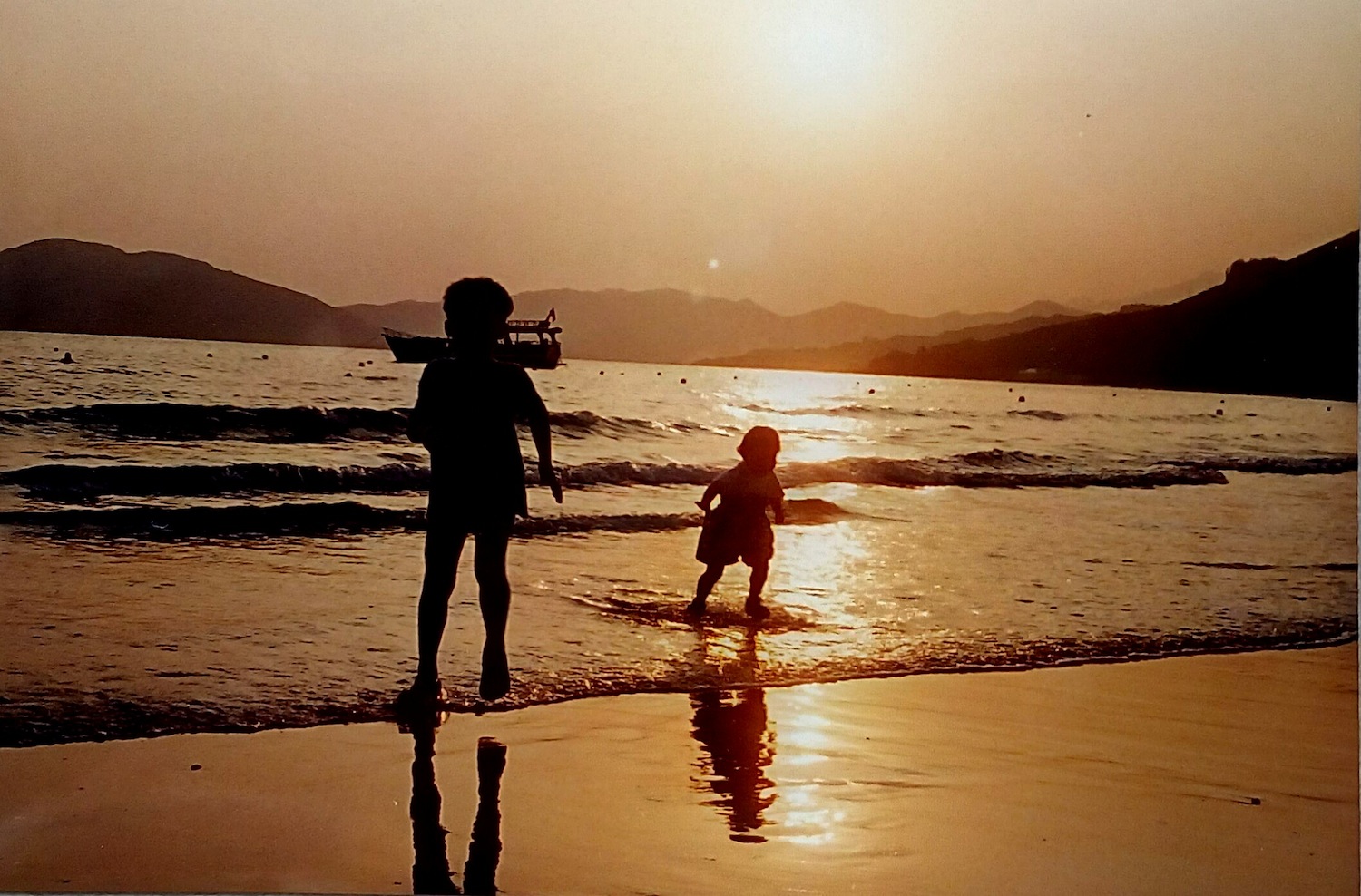 My brother and me, at sundown chasing waves

I lived by the sea in Sai Kung until I was four. It was a small village with few inhabitants named Sam Bui Zau, ‘three-cup-wine’. I remember few of the people who shared my life in that little village, except my own family, my sworn parents and their sons, and A-Lo and his mother.
.
A-Lo was a ‘mute bloke’, and that was how he was addressed by every villager. A-Lo was an unusual man, his grey hair cut was always very short, his tall body was tanned to a deep brown from the long years living by the beach, but his arms were strong and his feet swift. He was the perpetual apprehension of the village children, we were all terrified of his rough and animated manner of expression, and the way his broad strides sped through the village. It seemed A-Lo would come straight at us whenever he saw us, waving his arms and making loud, blurred sounds. He was, however, really just a ridiculously playful old boy, who spent his time patrolling the village, playing tricks on children and befriending them, in his own ways.
.
Everyday after homework was the beach. I would walk with my brothers down the pleasant little path through a labyrinth of houses, which was always cool under the shade of the young trees. We’d finish a packet of biscuits, and catch small crabs with olive shells and put them in an empty bag. By the end of the afternoon the bag was always full; we’d look for a while at the crabs jostling against each other, then pour them all back into the waves. Everyday after the beach was naked sandy feet and soaked shorts home, a hot shower and a big dinner—until the day I woke up to a new ceiling, a new room, a new flat in a new town, 27 floors above the ground. I ran up and down the flat, with bewilderment and perhaps joy too. Little did I know this moment only would turn out ever graver, whenever I thought of it in the years to come. We left our house because there was talk in the village that the Tree which stands right in front of it was going to be chopped down, to make space for a new house. The space would have been too packed.
–
A pile of large tubes lay idly on the edge of the sand like a small mountain, and I often climbed on top and sat there to watch the sea. I never slipped or fell. It was a special, almost private place that I had as my own. One day I was there with my mother. As she gave me a cookie I saw A-Lo come out of the trees and approach with alarming speed. I wanted to hide. But A-Lo came near, smiled and nodded in response to my mother’s greetings and small talk. Then he turned towards me. We stared at each other and he was not scary. Mum said, “Why don’t you share your cookie with A-Gong-Gong?” (‘Grandpa Mute’ was his title to children.) I thought, why not? I gave him the cookie. Then A-Lo smiled in a way I had never seen before, his smile fitted perfectly to the strong sun, the breeze that swirled around the tree branches, the smell of the salt on the sand, the sound of the gentle sea beating against little fishing boats, and the scorch of your feet on the afternoon beach. A-Lo murmured something, incomprehensible but soft and comforting. After a few more minutes he dashed off to his patrol again. After this event I continued to fear A-Lo, and he went on chasing and yelling the way he did, but I never forgot the short moments in which he and I were perfect friends.
.
A few years ago, for some reason, my family hired a car and drove past Saam Bui Zau. A great sign indicates that a part of the village is now a high end golf course. We got out of the car and walked in, past the Deer Willow Store, past the house of the jumping dog, and came to the Tree. It looked ever more enormous, mockingly feisty and lush. By the seaside rose a long iron fence which had already started to rust, the beach has been locked in, and I, out. I clasped the ugly fence and peered through its gaps, the beach was completely deserted, the waters growled in quiet rage and the sands looked pale. I wondered where A-Lo had gone, and whether he had ever imagined what become of me. I think I saw those grey tubes lying there still, and in great loneliness, beckoning me to come sit with them one more time.

Anna Tham is a BA graduate in Stylistics and Comparative Literature (Class of 2015). [Click here to read all entries by Anna.]