.
One of the songs that has been adopted by the protesters in Hong Kong during the Umbrella Revolution is “Do You Hear the People Sing,” from the English musical adaptation of Les Misérables. The rousing lyrics seem to perfectly capture the yearning and concerns of the democracy fighters in the city, and they have sung it again and again.

Earlier this year, a Cantonese version of the song emerged on the Internet, which has also been sung by the protesters. The translation, adapted specifically to the situation in Hong Kong, was undertaken by someone who has decided to remain anonymous. There is also a music video starring a delicate, big-eyed little girl, who is reminiscent of the character of Cosette from the novel. She sings the song in a determined yet innocent voice, with just a hint of vulnerability, provoking tenderness and sympathy in the listener.

While the opening line of the English version is ‘Do you hear the people sing?’, the Cantonese version changes the perspective: ‘May I ask who hasn’t spoken out?’ (This is a fascinating change and one ripe for a fuller cultural and linguistic analysis.) The question in the English version can be interpreted as both a rousing reminder to a unified general population about their political influence as well as a warning to those in power. In the Cantonese version, however, it is a more pointed question and is directed to those who have been silent for too long, or who have chosen neutrality or disengagement. It’s a plea, a request, a reproach—and one that brings to mind Ella Wheeler Wilco’s poem “Protest,” in which she writes: ‘To sin by silence, when we should protest, / Makes the cowards out of men.’

The opening line of the Chinese version also suggests a divide between those who have spoken out and those who haven’t. It importantly draws our attention to the fact that division is inevitable: there will always be people with opposing views to your own or those who, by choosing not to speak out, are expressing ambivalence towards or even dissent from your cause.

Right now, in Hong Kong, we see a society at a critical juncture. And it is a split society. There are citizens who feel strongly about the absolute necessity to fight for democracy, to be granted what we have been promised—universal suffrage by 2017. But there is a portion of the population that does not condone the approach adopted by the protesters and are dismayed, disheartened, and even disgusted by how events have unfolded over the past few weeks.

I feel this division personally because most members of my family have mixed or even critical views about the democracy movement: its direction, its speed, its scope. (It is certainly more complicated in my family’s case as one of my two brothers-in-law is a police officer.) Ever since Monday 29th September, one day after the police used tear gas against protesters for the first time and the day I changed my Facebook profile picture to a yellow ribbon, a ubiquitous symbol of the protest movement in the city (the other major symbol being the umbrella, which has more practical uses: to fend off the natural elements, as well as man-made tear gas and pepper spray), my family have interacted with me very little, both on Facebook and in real life. Even this smallest act of speaking up—changing a Facebook profile picture—was enough to create a division. And so we have fallen into a kind of silence. They know my views, and I know theirs equally well, and thus to avoid explosive arguments, an unwritten contract seems to have been written between us not to touch on the topic.

I am not alone. Behind every protester who stands next to you in Mong Kok, who sits near you on Harcourt Road, who opens an umbrella by your side in Causeway Bay, there is a story to be told. My experience echoes in people I know: friends and students. They, too, have to balance ideology and family, and this is causing emotional strain and breaking their hearts. These stories contribute to the overall history of Hong Kong now. The personal is political. The political is familial. 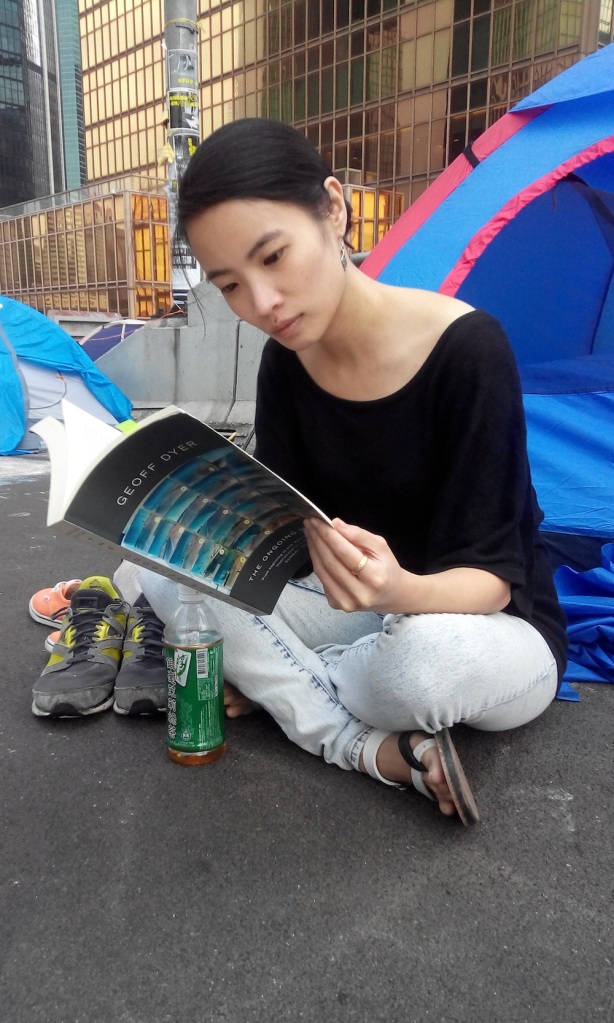 Early morning. Sunday 19 October 2014. Admiralty. Outside the tent that I shared with five students the previous night. I was reading Geoff Dyer’s The Ongoing Moment.

Tammy Ho Lai-Ming is Assistant Professor at the Department of English Language and Literature. She is the administrator of Agora. [Click here to read all entries by or about Tammy.]