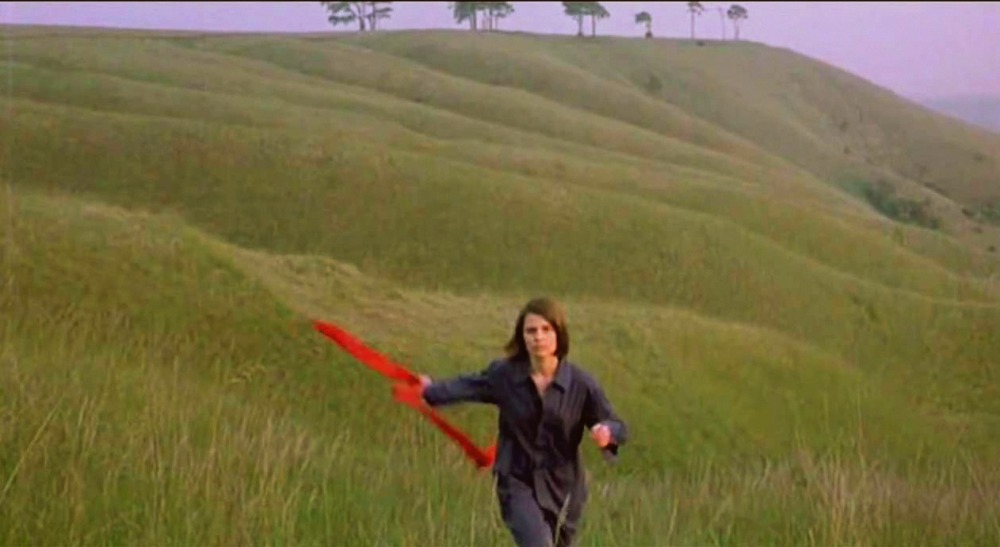 Julia is this moment of abandon prior to capture. And if it is a cliché that love and betrayal go hand in hand, then Julia is their handmaiden. She courts betrayal so as to entertain freedom. She represents the fighting chance that inspires hope or, as Chippewa critic Gerald Vizenor calls it, she conveys (at least for me) ‘the chance of no chance’. As such, Julia is always with us, in fact, at precisely those moments when we believe we are most irrevocably lost, damned, or alone.

The chance of no chance.

Julia is also St Jude, a patron saint of impossible causes, for a Godless age. Like St Jude, she proclaims necessary defiance under extreme circumstances. Her grainy and stubborn presence provides hard evidence that we are often at our best when the world is at its worst.

Julia, we recall, allows herself to be conquered by love for Winston, in a world where it was thought impossible. (This is, of course, a very impractical and silly thing to do.) That she allows herself to be caught is her downfall; but it is always-already her final triumph, too. She is not merely, as Winston first supposed, a ‘rebel from the waist downwards’.

So Julia risks love, moves her rebellion upwards, allows herself to be captured by love, and to be captured by the enemies of love. Once her body is captured she has, in the twisted ‘choice’ her—our—world requires, become truly free. She has been captured doubly, by love and by the state, in the very same gesture.

In the end, Julia surrenders to her love for Winston, knowing that it must mean her surrender to the state, too. And Orwell’s novel forces the issue. Which issue? The issue as suggested by our epiphany as readers, an epiphany that results in our awareness of an uncharacteristic rigidity, a zero-sum logic (most assuredly, under normal circumstances, to be avoided!), a false dichotomy which demands that Julia, or the world around her, choose only one among a maximum of two bad choices: first choice, die free; second choice, live enslaved. There should be, of course, a third or fourth or fifth choice. Or an array of many alternative choices converging, upon an imaginary instant, as the best (or worst) choice one can possibly imagine before other choices take their place. Julia’s love, we see, is an emblem of choices made and unmade. Julia is a choice made for love.

Stuart Christie is Head of the Department of English Language and Literature. “Julia” is an extract from a longer piece forthcoming in Eminence‘s newsletter on the theme of “Room 101”. [Click here to read all entries by Stuart.]