The movie is divided by the moment of the woman’s awakening (Scarlett Johansson) when she, for the first time, is under her own gaze. 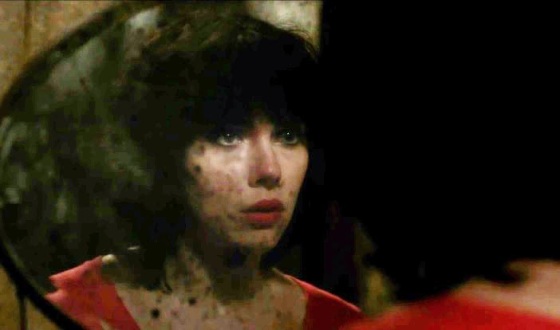 She sees her own reflection in the mirror on the wall. That is the moment of epiphany. The group of extraterrestrial beings she belongs shares the same gender concept as human beings. She, assigned as a female being, is uncertain or even unaware of her gender identity. She has also been under the male gaze of a “biker”, who is her accomplice in her “man-hunt” in the contemporary urban space. She is alienated in the urban landscape and haunted by the loneliness of urban life. Her sole motivation is to feed off the loneliness of men, which drives everyone, including her, by way of the momentum of sexual tension and attraction between the two sexes. In this urban landscape where everyone is motivated by sexuality, she is fearless because she has been told that she is beautiful, gorgeous under the male gaze. Beauty is the force facilitating the interpersonal interactions. Women and men talk and focus on only one thing during their very first encounter – the physicality and the consensual standard of physical beauty. 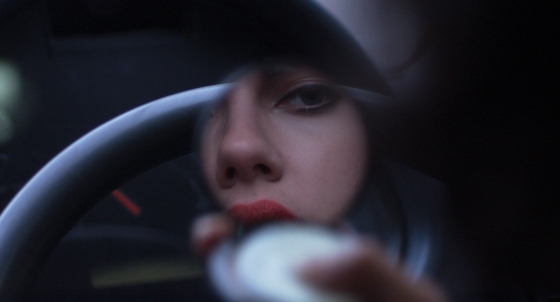 This standard is constructed predominantly by males and adopted or internalised by women through the consumerism of fashion and cosmetic products as the “woman” tries on the fur coat, pink cardigan, skinny jeans, ankle boots and red lipstick. The message is even stronger when the audience are brought to witness the male gaze in the scene where the male “biker” – presumably another member of this extraterrestrial group with a superior status, examines the “woman” in detail. He first comes around to see the back of the “woman” to see if the opening of the “skin” is intact. Here viewers get a close-up of the back of the head of the “woman”. Then he smells her and move around to see her complexion, make-up and her breasts. This scrutiny of female body under the male gaze represents the three common things men first notice in a female bodily presence – the face, breasts/cleavage and hair. The woman only knows she is “beautiful” because there is no objection from the “biker” – the male gaze says so. She is given a vision of her own body aesthetic by the males, which indicates that she is attractive enough to attract/seduce a man. Her purpose for living seems to lie only in driving that sexual force, the law of affection/attraction. She knows she is successful in the erotic interaction of two sexes. She is given the idea that she excels in the operation of urban existence – the formation of society – the interactions of social lives between males and females. She feels invincible as she is the one with power to arouse sexual attention and control these interactions. Therefore she is not even startled when a group of males attempts to violently get her out of her van. This is because she has yet attained a female self, a self-consciousness. In other words, she is invincible because she is yet to be sufficiently present to feel her existence threatened.

The turning point lies in the provision of a contrast, the suggestion of comparison. The idea of relative beauty rocks her back to face her own skin directly when she encounter a man with a deformed complexion. This is a crucial step for her to come to the realisation of her own skin-deep beauty and fragile bodily presence. Here skin-deep beauty is not pejorative but a matter of fact rooted in physicality. Right after the usual routine of seduction, the man with the deformed face becomes another victim of the “manhunt”, this process of seduction. The “woman” dresses up again, returns to the outfit which is approved under the male gaze, her other layer of skin sanctioned by the commodities of beauty. The “woman” walks down the stairs of the deserted house, the crime scene of the abduction. At the foot of the stairs, she finally has the chance to examine the details and the relatively complete image of her face. Previously, the only reflective surfaces that are available are the rear mirror in her van and the tiny mirror in her make-up case. She eventually “sees” herself for the first time and becomes fully aware of her bodily presence. She also gets to understand her beauty and the significance of it. She is beautiful compared to the deformed man. She has beauty and he does not. She pities him based on that simple comparison so she releases him from being devoured by the void in the same way others have been, supposedly to extract everything but the skin of earthling males to support a certain alien system. With this reflection of her image, she knows that her beauty is solely constructed by this sack of skin. Her female gaze is formed over her own body, she becomes fully aware of her bodily presence. From this moment on, she is present and open to threats.

Frightened and disorientated at the new discovery of her bodily presence, the “woman” escapes from the urban space into the rural landscape. She is lost and appears so vulnerable under the male gaze in the cold countryside. Without being aware of it, her beauty and vulnerability make her even more attractive to men. As befits the gender requirements in relationships – men are deemed as the stronger ones, both physically and mentally. They, not the female members of society, are the ones who are “qualified” to provide and to protect. With all these criteria of attraction in place, the men take up the part to protect. After the act of kindness, there is the urge to run from loneliness, which is amplified by the constant rain and bleakness of the rural landscape. She comes to accept that desperate affection and in order to repay the debt of his kindness she tries to offer her own body without fully comprehend the mechanics of a sexual interaction and the private parts of a female body. The scene is composed with dark humor where the “woman” is shocked to discover the existence of her vaginal opening. She grabs the lamp over the bedside dresser and try to look closely to this particular opening on her bag of skin. The suggestion of female vulnerability through the intrusion of this opening rings an alarm bell. She has to run away from any potential intruder of her female territory – males. She therefore escapes from the scarcely populated suburbs and further into the woods.

In the woods, she leaves the urban landscape and its dangerous dwellers behind. Solitude is supposed to be her only company. She can take shelter in the symbolic “hiking shelter”, where she can finally close her eyes and try to sleep. Ironically, the hiking shelter and the solitude of the wilderness provide no protection but even direr traps and violence. A lone logger, who initially appears to be kind, comes to the shelter and molests the “woman” in her sleep. Startled by the malicious touch, she flees and comes across the logging truck. She tries to start the engine and drive it to flee from the monster. She returns to the environment inside a “vehicle”, a shelled mechanic body suggesting the urban technological and civilised space. This time she finds no protection from it and has to escape back to the woods because she is no longer the “woman” who can feel invincible due to her bodily “absence”. In the binary opposition displayed in the context of physical environment (urban/rural) and ways of beings (civilised/barbaric), the logger and the “woman” are stripped down to their instinctive mode of beings. The man takes advantage of the female vulnerability and the deserted wilderness. He has attempted to defile the “woman”. In this context of rural landscape, she is vulnerable and under attack, but no longer available to the rescue, the acts of kindness from men as required under the social etiquette in the civilised urban space. In this unknown wilderness and danger, she is stripped down to her survival instincts.

She fights and eventually her human skin is torn off under the violence. The man discovered she is something alien under her skin. She is unknown, and anything unknown to men is deemed a threat. His animalistic impulse pushes him to get rid of such threat in order to secure his own existence. The “woman” now stripped of her human skin finally realises the exterior physicality which has prevented her being present is now gone. She tries to fight the fire that is set on her body by the intruder and yet she comes to understand and accept the vulnerability of her presence without and under the skin, in the woods, under the sky of the middle of nowhere.

I am silver and exact. I have no preconceptions.
Whatever I see I swallow immediately
Just as it is, unmisted by love or dislike.
I am not cruel, only truthful ‚
The eye of a little god, four-cornered.
Most of the time I meditate on the opposite wall.
It is pink, with speckles. I have looked at it so long
I think it is part of my heart. But it flickers.
Faces and darkness separate us over and over.

Now I am a lake. A woman bends over me,
Searching my reaches for what she really is.
Then she turns to those liars, the candles or the moon.
I see her back, and reflect it faithfully.
She rewards me with tears and an agitation of hands.
I am important to her. She comes and goes.
Each morning it is her face that replaces the darkness.
In me she has drowned a young girl, and in me an old woman
Rises toward her day after day, like a terrible fish.

It is not imperfection, the reflection of her image, that the “woman” from the mirror dreads, but the moment of discovery of a bodily presence which leaves so many traces of her existence but has never been conceived possible by the “woman”. As she has long been under the male gaze, and once the male gaze is replaced with her own female one – she sees an unreality of herself. Her presence makes the reality that she has been long familiar with – the male dominant reality – so surreal. Women, including herself, cannot be that present. This unreality of the absent-presence of female bodies dooms the fate of the “woman”. She is combusted in a trail of smoke, returning to the void. 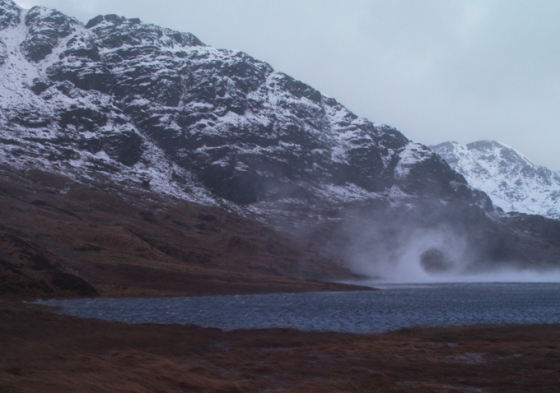 Suzanne Lai is a BA graduate in Stylistics and Comparative Literature (Class of 2014). [Click here to read all pieces by Suzanne.]