For much of the world touched by the cultural spread of English that began with the age of exploration in the west to the rise of the United States following the Second World War, the language of prestige is a twisted dilemma of what is foreign and what has become also indigenised. Students of English are guided by the good intentions of their teachers, elders and society to aspire towards good command of the language. However, that aspiration often confuses elegance and articulateness of speech with imitation of some unnatural standard. This undermines not only confidence among people for whom English is a language well indigenised into the communities, but also distort the genuine character of their linguistic expressions.

When a poem is written, a part of the poet’s heart is opened so that a reader may hear a poet’s inner voice. When an Asian poet writes in English, one wonders if that voice had been self-censored and edited to align with certain perceived foreign standards. This project engages world leading poets to read in an English that is true to their character. It is a corpus that demonstrates how true sounds will always ring truer than contrived ones, especially when one is willing to help others see, hear, and feel the humanity of one’s own linguistic heritage.

The recordings below, by Nguyen Bao Chan and Ko Ko Thett, two of the visiting writers who attended Hong Kong Baptist University’s International Writers Workshop in 2017, serve as evidence that Asian Englishes can be elegant, beautiful and expressive without being inaccessible to other Englishes.

The exhausted verses of my poetry

The proud verses of my poetry
return to me –
a room of memories
their footsteps beat,
awaking each corner of oblivion
and they talk to echo
of myself. 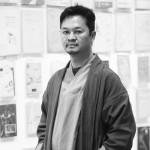 My skin was born in the Year of the Pig. My accent, much later, and it’d rather be a Capricorn.

I seduce women with my accent. I subdue them with my skin.

You will still hear my skin whinge even after maggots dwell and die in my accent.

My skin is my landscape, my accent my fresh air. My skin is too thin for bad weather. My accent, incredibly thick it will whistle under water.

I am not one of those who are sentenced to solitary confinement for life inside their own skins. I can get under your skin once I walk out of my accent.

People judge me by my skin. My skin’s purpose in life is to prove them wrong. Once I open my mouth my accent will prove them right. I keep my mouth shut, my skin open.

Which is truer, my skin or my accent? When it comes to swinishness they are on the same page.

In places where I am considered white, my yellow accent always holds me back. Since whatever out of my mouth is unpasteurized lie, I will always have a yellow accent.

it will be blues when it fancies blues;

it will be jazz when it fancies jazz.

A member of the Vietnam Writers Association, Nguyen Bao Chan trained as a cinema scenarist at the Hanoi Cinema and Theatre University, and earned her Bachelor of Arts in 1991. She currently works for Vietnam Television as an editor in the areas of Arts and Culture. Her major publications are Burned River (Publisher of Vietnam Writers Association, 1994), which received an Award from the Vietnamese Literary and Arts Union in 1994, Barefoot in Winter (Youth Publications, 1999), and Thorns in Dreams (Vietnamese-English bilingual edition, The Gioi Publisher, 2010). Her works are also included in The Defiant Muse: Vietnamese Feminist Poems from Antiquity to the Present (Women’s Publishing House, Hanoi, 2007) and many other poetry anthologies. She has read her poetry at literary festivals in Vietnam and abroad, including the prestigious international Poetry Festival of Medellin in Colombia (2008), Poetry Parnassus Festival in London, United Kingdom (2012), Festival International des Poètes en Val de Marne in Paris, France (2013), and the Melbourne Writers Festival in Melbourne, Australia (2015).

Ko Ko Thett is a poet by choice and Burmese by chance. His poetic career was discreetly launched with the publication of a samizdat poetry chapbook at Yangon Institute of Technology in 1994. After he left the country in 1997, Thett began writing in English. He has won a PEN translation award for the seminal anthology Bones Will Crow: 15 Contemporary Burmese Poets, which he co-edited with James Byrne. His collection of poems The Burden of Being Burmese (Zephyr, 2015) is listed on World Literature Today’s “Nota Benes”. After a whirlwind tour of Asia, Europe and North America for about 20 years—Thett happily resettled in Sagaing in central Myanmar in 2017. He is an Honorary Fellow in Writing at the University of Iowa, and country editor for Myanmar at Poetry International in the Netherlands. He writes in both Burmese and English.

Lian-Hee Wee is Professor at the Department of English Language and Literature. [Click here to read all entries by or about Lian-Hee.]