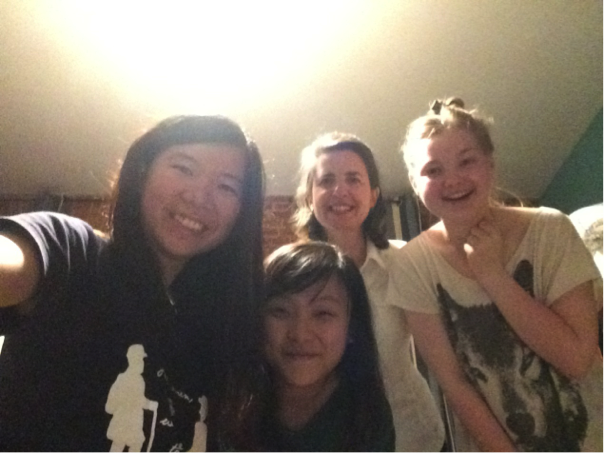 From left to right: me, Nicola, Julia and Jenny. This photograph was taken when Julia was about to leave and go back to Argentina.

.
In late May this year, Nicola and I travelled to Moscow. During our stay, we lived in a rather small-scale hostel. It is normal that people living in hostels seclude themselves from socialising with other roommates, who will unlikely appear in their lives again after one or two days. But a huge Russian man facilitated our acquaintance with our roommates, Jenny from Tyumen, Russia and Julia from Argentina.
.
On the second night of our stay, the Russian man came to the hostel and claimed to be our roommate. We briefly introduced ourselves before he began to share his past in his limited English. Impatient with his unsystematic and illogical expressions, Julia excused herself and left the room, while we continued to listen to him without understanding what he meant. Sensing the light-heartedness in our responses, he left the room shortly before Julia came back after dinner. We tacitly started to talk about this bizarre man when we were finally rid of him:
.
‘I am not an expert in drama but his behaviour reminds me of Harold Pinter’s The Homecoming,’ Julia said.
.
‘Does he remind you of Ruth?’ I excitedly replied.
.
‘I’m not sure about the name of the character. There is one who wants to dominate the others. When that man requested that we open the window right after entering the room, I thought of the play at once.’
.
‘What did he say to you in Russian?’ Nicola asked Jenny.
.
‘He said, “I hate you and I will never talk to you”.’ Jenny sighed.
.
Later, he got drunk at the lounge. He started to laugh lunatically and slur humiliating words loudly in Russian. Although the staff had already called the police and were dealing with this huge drunk man, Julia was alert enough to lock the door of our room immediately. We sat down in silence, waiting anxiously. We could only guess what was happening outside based on what we could hear and Jenny’s translation. We were frightened when he tried in vain to open the door. (Luckily, Julia had locked it!) Half an hour. One hour. We had no idea how long we waited. We dared not go to the bathroom. We dared not sleep. We had to stay together. The four of us.
.
In the end, he was taken away by the police.
.
Reminiscing about this incident one month later, I do not feel scared. Instead, I am pleased that I encountered ‘The Crazy Man’ with my dear roommates. The moments when the four of us were trapped in the room, when we feared together, when we were brought closer to one another will never happen again.
..